A couple of news announcements about Penn State caught my eye this week. Both are attempts to get past significant scandals by taking policy or programmatic action.

As I wrote in an earlier blog post on recovering from a PR crisis, there is a basic formula used by most people and groups who successfully move past a major scandal. It includes:

Penn State has already undergone years of negative news coverage and criticism in the wake of the Sandusky child abuse scandal, and they continue to be hit with bad news—most recently when former President Graham Spanier was sentenced to two months in jail for his role in allowing the abuse to go unreported. But in an interesting update, Penn State announced in April the creation of a research center aimed at understanding, preventing and treating child abuse. This week’s update notes that the center will open in September. The latest announcement received wide news coverage and now pops up in search for “Penn State” and “child abuse.” This kind of positive programmatic response is consistent with Step #4 in the recovery playbook. 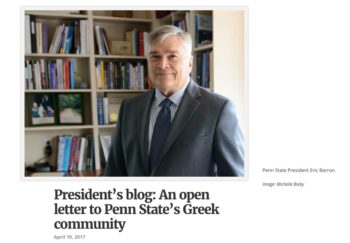 Another topic that has consumed the public dialogue more recently is the death of a 19-year-old Penn State fraternity pledge, Timothy Piazza, in a hazing incident in February. Penn State President Eric Barron responded strongly and followed the recovery playbook by taking responsibility and announcing a number of action steps. In its latest action the university this week announced the creation of a 17-member Greek life advisory group that includes faculty, students, and community members.

The student’s death at Penn State was horrible and happened in circumstances that point to ongoing challenges with fraternity hazing across the country. It truly was a “there but for the grace of God go I” moment for university leaders everywhere. But we can look to Penn State’s strong response in that situation as a potentially useful model for how to handle a terrible tragedy that should lead to leadership accountability and policy changes.