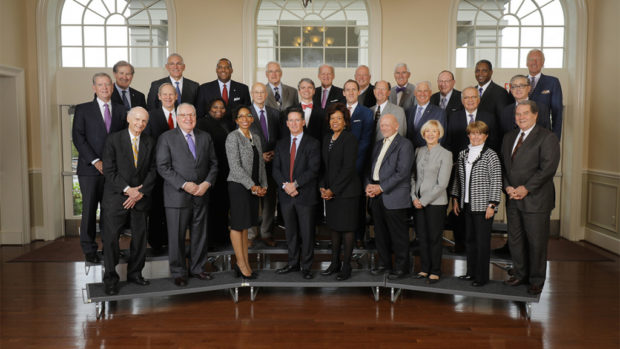 One of our longtime clients, Furman University, recently learned that it has been recognized by the Association of Governing Boards (AGB) for outstanding governance. I had the opportunity to work on the governance refresh that led to this award, in partnership with noted governance expert Richard Chait.

Governance, while perhaps not the most high-profile topic for a college or university to tackle, has the potential to make a huge difference—in the ability of the institution to pursue strategic opportunities, in the engagement and philanthropic support of trustees, and in the success and satisfaction of the president or chancellor. And perhaps to state the obvious: Because the president reports to the board, it can be intimidating to address governance issues and figure out where to even begin.

The project at Furman began with an interview of each trustee, summarized in a report to the board. An Ad Hoc Committee on Governance was convened with diverse membership from across the board, and the committee worked intensively over more than a year to consider ways to strengthen governance, become more strategic and, in Dick’s words, take up a higher proportion of “generative” work that asks deeper questions to inform critical choices about the future of the institution. The result was a change in the way the Furman board operates, adjustments to committee structure and board terms, a stronger pipeline for recruiting new trustees, and a fairly dramatic change in the way board and committee meetings are structured.

This was my most significant effort at board self-assessment, and I took away a few lessons that are worth sharing as others consider how to make governance as effective as possible. Factors that contributed to Furman’s success include:

Strong peer leadership: A wisely chosen ad hoc committee chair and membership, with a diversity of viewpoints among people who were widely respected by their peers, allowed the board to trust the committee’s recommendations. Peer leadership was absolutely critical—it needed to be clear that this was an effort being pursued by the board, not an initiative led by the president or her administrative team. The Ad Hoc Committee on Governance also included the board chair and university president in ex officio roles, and while they did not dominate, both contributed important perspective and much-needed wisdom at key points.

Trustee input at the outset: Beginning the project with a confidential interview of every trustee allowed them to feel heard and to be confident their perspective was fully considered. It also created a kind of “social norming,” where those whose views differed from their peers could see where concerns were shared by a majority of trustees and where the consensus was building.

A principled foundation: Dick reinforced that while the Ad Hoc Committee on Governance might be impatient for solutions, it was important to first determine the board’s purpose and higher order goals. Those principles should shape the structure. As an example, we developed board committees, such as Student Experience and Outcomes and External Engagement, that mapped to Furman’s strategic vision, The Furman Advantage. We began the conversation about board committees by considering, in concept, what such committees should and should not do. Those statements of philosophy helped to resolve any disagreements about the specifics.

Benchmarking: An informal survey of governance practices at peer institutions and a review of AGB’s national survey data showed Furman’s board where it was a leader, where it was an outlier, and where it was in good company. There were no huge surprises, but having comparative data gave the ad hoc committee some comfort and also provided evidence to support areas where change was needed.

Early wins: As one ad hoc committee member reminded us, the Furman board did not need to wait until the end to notch some successes. One of the easiest changes was to make improvements to the way board meetings were conducted. Armed with input from the trustee surveys, Furman’s administration and board leadership revamped board meetings, with more time spent on substantive and strategic topics, less time on housekeeping that could be supplied in written form, and more active engagement in discussion, break-out groups and other interactive exercises.

Sufficient time and process: The entire effort, from initial interviews to board adoption of new bylaws, took about 15 months. During that time the ad hoc committee chair provided regular updates to the board via email and discussion at each board meeting. The board had multiple, substantive chances to engage with the committee’s proposals. And where board members voiced legitimate questions and concerns, the committee listened to the feedback and responded with adjustments to its recommendations.

Furman’s board deserves credit for being reflective in the same way the university teaches its students to be reflective. I was impressed with the board members’ constructive and thorough self-assessment, one that enabled thoughtful dialogue and kept the institution’s best interest at the center of the work. The process we developed was so effective that it has now become a model for how the board tackles other complex topics.