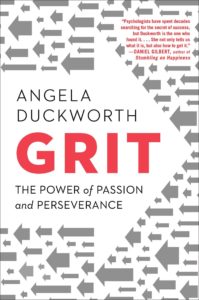 Effort counts twice. So says MacArthur Fellow and psychology professor Angela Duckworth in her thoughtful book called Grit. Duckworth studies what it takes to be successful and argues that passion and perseverance – not talent alone, or even primarily – are the critical factors in determining success: whether you are a new candidate at West Point, a scholar, a writer, a potter or a CEO.

“When you consider individuals in identical circumstances, what each achieves depends on just two things, talent and effort. Talent – how fast we improve in skill – absolutely matters. But effort factors into the calculation twice, not once. Effort builds skill. At the very same time, effort makes skill productive.”

As I was thinking of the many examples Duckworth offers, my own first-generation college student experience came to mind. Many first gens have talent, certainly, but what sets them apart is passion and perseverance. Without prior family experience navigating the collegiate territory, they have no road map. Often financial resources are limited, too, so they have to work without a safety net. University of Michigan President Mark Schlissel has said that “talent is ubiquitous, but opportunity is not.”

First gens tend to share the characteristics Duckworth defines as grit: persistence, tremendous internal motivation, a powerful “get it done” work ethic. They learn how to conquer, or at least not be conquered by, the fear of the unknown.

I am always struck by examples of first-generation students whose life experiences were seemingly a barrier but, in combination with drive and hard work, became tremendous assets. I recently read about the incoming president of the University of Illinois at Urbana-Champaign, Robert Jones, who was the son of a sharecropper in Georgia. His path to studying science came from picking cotton and peanuts. Grit clearly lined that road.

Another example from my “role model” category: Supreme Court Justice Sonia Sotomayor. Born in the Bronx in deep poverty of Puerto-Rican parents, she overcame juvenile diabetes and lack of opportunity to graduate with highest honors from Princeton and Yale Law School. In her memoir My Beloved World, Sotomayor says: “a surplus of effort could overcome a deficit of confidence.”

Author Malcolm Gladwell has been critical of elite universities that he believes are not doing enough to reach out more broadly to identify talent and drive and to provide opportunity. He says that future generations will ask: ““How good a job did you do at helping people in your society reach their potential?”

We might reframe Gladwell’s challenging question this way: “How well are we doing at recognizing the unique contribution that grit makes to our campuses and our world? What are we doing to help those who demonstrate this quality? How do we channel the energy of striving into the fulfillment of succeeding?”

A future blog post will look at some best practices in higher education, highlighting universities that have implemented programs to recruit and, importantly, best support the first in family to attend college. It is time to bet on grit.