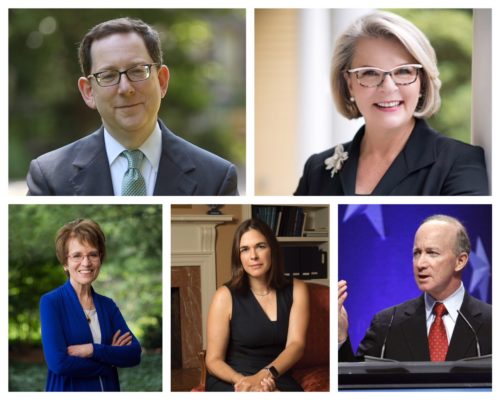 In our work with higher education leaders, we help college presidents and other leaders identify compelling topics and make their voices heard through op-eds, speeches and written communications. Doing so benefits their institution, contributes to the sector, and can influence both policy and public opinion in powerful ways. And given the coarsened nature of our public dialogue, these carefully considered perspectives become even more important.

As we noted in our recent essay about trends for Inside Higher Ed, the past year saw a number of leaders speaking up strongly on relevant issues. We reviewed the past year’s worth of presidential communications, and we offer below those contributions we thought were among the most interesting and impactful.

“Rather than helping people who feel they have little power or voice, students who squelch speech alienate those who are most likely to be sympathetic to their message.”

Schill responded forcefully in the New York Times to a campus incident in which protesters prevented him from giving his state-of-the-university address. Schill was not the only president to use the bully pulpit to address troubles on campus. Laurie L. Patton, president of Middlebury College, addressed free speech controversy with an op-ed in the Wall Street Journal. And Penn State President Eric J. Barron wrote in USA Today about potential solutions to eliminate fraternity hazing after a horrendous student death.

Mitch Daniels, Purdue University: Is Anyone Ever Wrong Anymore?

“John Maynard Keynes is frequently credited with the aphorism ‘When I find I’m wrong, I change my mind. What do you do?’ Today, the problem may less be an attitude of stubbornness than that fewer people than ever recognize their mistakes in the first place.”

Daniels, who sometimes gets unfairly pigeonholed as a former politician who’s at odds with academic values, waxed scholarly in this piece in the Washington Post about the quality of public discourse. He also co-authored an interesting piece in Time magazine with George Miller, former member of Congress and co-chair with Daniels of the Aspen Institute Prize for Community College Excellence: What Community Colleges Do That Universities Don’t.

“Science does not have an agenda, science seeks the truth and it is impossible to seek evidence-based gun violence reforms if we cannot study the issue.”

“In the midst of a revolutionary expansion in ways to communicate with each other, we increasingly surround ourselves with those of like mind, pointedly excluding others with a different world view. We say it’s easier, more comfortable, and even less confrontational, that way. Our polarized country is the result.”

Napolitano, a frequent op-ed contributor, used this op-ed in USA Today to announce the launch of a free speech center at the University of California.

“The historical and cultural significance of the Confederate statues on our campus — and the connections that individuals have with them — are severely compromised by what they symbolize. Erected during the period of Jim Crow laws and segregation, the statues represent the subjugation of African Americans. That remains true today for white supremacists who use them to symbolize hatred and bigotry.”

Following the violence in Charlottesville, Fenves explained in this message to his campus why he acted quickly to take down Confederate statues on campus. Duke President Vincent E. Price made a similarly swift decision and issued an equally strong message to campus.

“Your daughter doesn’t need to grow up to run a tech company, but our society is better off if she has mathematical and scientific chops and the confidence to use them.”

In this Washington Post essay, the president of Barnard and cognitive scientist drew upon her own research to advise parents how to strengthen their daughters’ confidence in math and science.

“When we demonstrate greater self-awareness, increased empathy and appreciation for the perspectives of others, we are more likely to be engaged in our communities and in public service. Our democratic society desperately needs universities to fulfill this role, and we must step up to the challenge.”

Furman’s president wrote in University Business about how colleges can produce engaged citizens and demonstrated how her strategic plan, The Furman Advantage, will help to fulfill this critical role.

“We can’t have two North Carolinas. We can’t have a state where the ZIP code you’re born in dictates your future.”

In this essay in the Raleigh News & Observer, Spellings addressed the pressures of economic and social inequality in North Carolina and the responsibility of public universities to contribute productive solutions.

“I came to this country 43 years ago. The US immigration system worked well for me. It granted me a student visa and eventually a green card. Years later, on a beautiful day that I will never forget, I became an American citizen. I have the particular patriotism of an immigrant, rooted in deep gratitude and appreciation for a country founded on a dream of fairness.”

Writing in the Boston Globe in August at the time President Trump was reported to be considering a repeal of DACA, Reif drew on his own experience as an immigrant to argue strongly for protecting undocumented students who were brought to this country as children by their parents.

“To stifle free expression and open discourse and suppress speech that you don’t like is just an invitation for others to do the same.”

The University of Chicago and its president have received ongoing attention for their defense of free expression and open inquiry. Zimmer explained the university’s approach in this speech at Colgate University in March. More recently, his public statements on the topic of free expression led New York Times columnist Bret Stephens to label him “America’s best university president.”