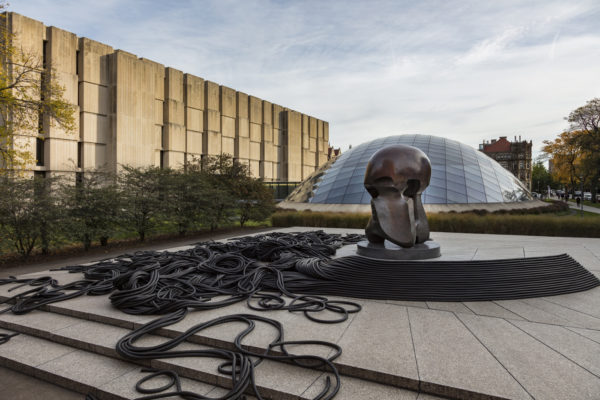 This fall the University of Chicago, together with Argonne National Laboratory, celebrated the 75th anniversary of the first self-sustained nuclear reaction. UChicago has a reputation for producing world-changing ideas, and it was fitting to honor the contributions of the scientists whose major scientific discovery shaped human history in profound ways. Yet, at a time of renewed international nuclear tensions, this could not be purely a moment of celebration—it also required serious reflection.

The range of events, stories, media coverage, and multi-media content that UChicago created is a wonderful case study in how to take a single idea, explore it from multiple directions, and have it reach a huge audience with messaging that reinforces the university’s intellectual brand.

The original planning was done by a faculty committee, with support from a number of administrative offices. Here is a description from Provost Daniel Diermeier’s message to campus:

“The approaching 75th anniversary of that first nuclear reactor provides an unusual opportunity for our community to reflect on the meaning of the scientific feat and its complex legacy, which continues to impact world affairs. Starting this month, and as a result of a recommendation from a faculty committee, the University is hosting a series of events titled ‘Nuclear Reactions – 1942: A Historic Breakthrough, an Uncertain Future.’ The events, listed here, will bring together perspectives from many fields—including the arts, energy, engineering, medicine, nuclear physics, and policy—to assess the enormous power that the first chain reaction unleashed in the world, with the potential for good or for vast destruction. The commemoration will culminate with a two-day program on December 1-2 that will include discussions with global experts and artistic performances, including the world premiere of the composition ‘Plea for Peace’ by University Professor August Read Thomas.”

As an observer, I saw the output of these efforts across traditional and social media. I called Paul Rand, the Vice President for Communications at UChicago, to find out more about the work.

“The team did a super job—we estimated that our work reached more than 600 million people in all,” Rand said. “We approached this not just as an anniversary, but as something that is relevant today. The question first was, should we be doing it, and if so, how could we do it in a way that was appropriate and reinforced what the University stands for? We decided to do it in a way that acknowledged and commemorated the discovery, helping people understand the good that came out of it, the dangers and the responsibility.”

One thing that struck me was the range of thoughtful storytelling created by the university itself. In researching the archives, staff discovered that one of the original participants, Ted Petry, was still living. They interviewed him for a compelling feature story: A Witness to Atomic History. Among the many additional stories were these, reflecting the university’s multidimensional approach:

The communications team also created a number of videos, some longer and more scholarly in tone, others designed specifically for sharing on social media. A one-minute video captured the key moment of artist Cai Guo-Qiang’s pyrotechnic display near the site of the original breakthrough.

Coverage by the news media was widespread. A few highlights:

One of the things that Lisa and I often recommend to our clients is the effectiveness of identifying a few big ideas that reflect the institution’s distinctive contributions, strengths and culture. Rather than going for quantity of output and creating a great deal of “noise” to less effect, we see the impact of fewer things done to a high level of creativity and emphasis, with broader sections of campus included in the planning and execution. UChicago’s 75th anniversary commemoration is a wonderful example of the power of this approach.