George Mason University’s Steven Pearlstein wrote a compelling piece in the Washington Post recently bemoaning the current rap on a liberal arts education:  preparing students only for a career as a coffee house barista.

The narrative, propagated by parents, media and the general culture today, goes like this: Students need practical, pre-professional and skill-based training to get a job once out of college. Literature, history and anthropology just don’t make the cut.

“This focus on college as job training reflects not only a misreading of the data on jobs and pay, but also a fundamental misunderstanding of the way labor markets work, the way careers develop and the purpose of higher education,” Pearlstein wrote.

He pointed to data showing that among CEOs of the largest corporations,
there are roughly as many engineers and liberal arts majors, in total, as there are undergraduate majors in business, accounting and economics combined.

I am heartened by comments from business leaders now speaking out on behalf of the liberal arts. David Kalt, CEO of Reverb.com and co-founder of online broker optionxXpress, wrote an essay in the Wall Street Journal this June called “Why I Was Wrong about Liberal Arts Majors.”

Kalt noted the importance of critical thinking skills developed in the study of the liberal arts: “Critical thinkers are self-learning machines.”

Not long ago, I heard former Twitter CEO Dick Costolo speak passionately on behalf of the liberal arts as preparation for a successful career and life path. He said that study of the humanities and social sciences gives you “an awareness beyond the self” that is so important for leadership.

I have talked at length with the University of Michigan’s dean of the College of Literature, Science and the Arts, Andrew Martin, about this topic. Martin points out, “In a shifting economic landscape, being able to ask the right questions and discern what matters in the answer is a job-survival skill. Graduates develop the adaptability to embrace emerging fields and shape the future, preparing them for their first job and for their fifteenth job.”

But how can we communicate the value of a liberal arts education more effectively?

Certainly the voices of successful CEOs describing how they hire and what they value in employees are critically important to more accurately reflect career prospects.

But today’s skepticism shows us that we have to connect the dots for families. We have to demonstrate concrete outcomes using well-reasoned arguments and data, as Pearlstein does in the Post essay. 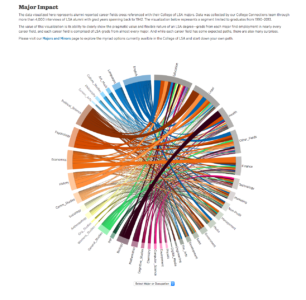 U-M’s College of Literature, Science and Arts has an interesting approach: The school has created an interactive graphic, using data beginning in 1990, to track the career fields of graduates in each LSA major. The college website describes the fun-to-explore graphic this way:

“The value of this visualization is its ability to clearly show the pragmatic value and flexible nature of an LSA degree—grads from each major find employment in nearly every career field, and each career field is comprised of LSA grads from almost every major. And while each career field has some expected paths, there are also many surprises.”

Martin is right, too, to call for sustained tracking of this information over time—not simply right out of college.

“Showing what happens right after graduation isn’t enough. We need to show people how our graduates sustain success and how they develop as leaders over the course of their careers, adapting to new professional paths as the desire or need arises.”