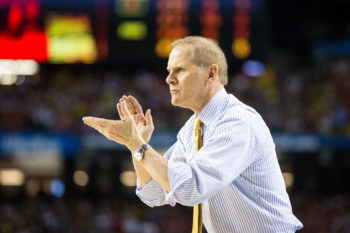 On March 8, the University of Michigan men’s basketball team along with the cheerleaders and pep band members were all on their way to the Big Ten tournament when the unthinkable happened. Their chartered plane, just clearing the ground during takeoff, was caught in high winds. It came down hard and skidded off the runway.

Here’s what Washington Post columnist John Feinstein said about what happened next:

“As soon as the plane stopped, the doors were opened and the slides came out. With the crew shouting instructions and Coach John Beilein playing crew member, the plane was evacuated in a couple of minutes.”

Then, and over the next twenty-four hours, Coach Beilein demonstrated some powerful lessons in leadership.

In the course of our careers, Julie and I have worked with university leadership teams to manage challenging issues, and to plan well in advance so a tough issue does not become a crisis. But sometimes you simply cannot predict the unpredictable, the suddenness of a crisis beyond your control.

How a leader handles the unthinkable is worthy of our consideration.

Coach Beilein, “playing crew member,” helped evacuate the plane that day. He made sure the young people on that flight escaped down slides to safety. He became the helper, not just the guy in charge. He made himself personally responsible for the safety of those in his care.

Later that night, when the team finally settled into a nearby hotel, the coach made a decision. He had planned a walk-through of the game, the Post columnist reported, but decided against it. “I said, no, not now, we have to deal with how we’re all feeling about this first.”

How very wise, and emotionally important for him and his team. We are not automatons, and when faced with a crisis situation we simply cannot move on as if it had never happened. Leaders understand that their community needs time to face fears and process all it has experienced.

As the coach shepherded his team into the first game of the tournament the following day, he helped his student athletes take the next steps forward with motivation and inspiration. The Post column quoted sophomore Moritz Wagner:

“Coach told us before the game to be grateful we were here with the chance to play and enjoy competing. I think we all took that to heart.”

Gratitude. It’s a powerful antidote to fear, and given what the team had been through it offered a positive bridge to get on to the court with focus and determination.

Michigan won that game, and the next, and as I write this the team has just beaten Minnesota in the semi-finals to move on to the championship game. But the biggest win of all is the team’s ability to move beyond near tragedy with the help of a coach who called all the right plays even under extremely tough circumstances. Coach Beilein’s leadership moment did not come out of the blue, of course (no pun intended). It is leadership muscle developed over time, honing team building and decision making guided by core principles. It is this toolbox of skills leaders tap even when they least expect it but need it most.

Footnote full disclosure: I’ve known John Beilein and his family most of my  life. Our family’s friendship goes back three generations. He was my seventh grade social studies teacher and our school’s basketball coach, fresh out of college. Our family has watched his coaching career with pride over the years, but I have never been prouder of him than I am right now.

1 thought on “A Hard Landing, and Lessons in Leadership”